The birth of the Cremation Society

The great nineteenth century Liberal Prime Minister William Ewart Gladstone said that the manner in which we dispose of the dead provides an inclination as to how evolved a civilization has become. Our evolutionary trail has led us to favour state of the art technology in cremation processes over burial, but how did we get here?

From the time of earliest man, an attempt to provide a degree of ceremony and care in the disposal of the dead has been evidenced and with the passage of time funeral rites have become increasingly ceremonial in execution, however until the late 19th Century burial was the only option.

The Industrial Revolution in Britain led to urban population growth with overwhelming unsanitary overcrowding in burgeoning industrial towns and cities. Many places like Glasgow succumbed to outbreaks of cholera, typhoid, dysentery and scarlet fever. Churchyards simply couldn’t adequately cope with the increasing death rate and an alternative and more hygienic manner in which to dispose of the dead was sought.

Sir Henry Thompson 1st Baronet and then Royal Surgeon, is considered by many people to be the founding father of the British Cremation Society having advocated and petitioned for the legal restrictions on cremation to be removed thus enabling Britain’s first crematorium to be opened in Woking in 1885 . Public opinion to make the transition from traditional burial practices to cremation progressed slowly.

Glasgow Crematorium was opened in 1895 and is the first crematorium to be built in Scotland.

It was designed by Glasgow architect James Chalmers an associate of Alexander (Greek) Thomson in 1893 and was built in Gothic Revival style to appeal to Victorian sensibilities and the influential Kirk. It was constructed in traditional red Scottish sandstone locally quarried and internally boasts rare marble pillars, and other fine architectural features as in eaves cornicing, dog tooth relief, a beautiful vaulted ceiling in the Old Chapel, a unique internal columbarium tower for the containment of some 3000 urns and caskets of ashes as well as windows which boast some of the finest examples of stained glass in Scotland.

Glasgow Crematorium notwithstanding it’s unique position within the history of cremation in Scotland, was awarded Category B Listed status by Historic Scotland in 1992 for being a building of architectural/historic interest.

The first cremation undertaken at Glasgow Crematorium on 17th April 1895 was that of a sheep, in doing so the Society was able to prove the effectiveness and hygienic nature of the cremation process. Acceptance of the new mode of funeral was slow in Scotland, it took 10 years to reach 191 cremations; currently we perform close to 1,700 services annually.

The Old Chapel initially contained no seating, and mourners would stand throughout the committal service similar to attendance at a graveside, just as the preferred mechanism for committal was one of lowering comparable again to traditional burial practices.

Pews were installed for public comfort in 1953 to accommodate 100, a second New Chapel providing seating for 50 was built in 1954. The building underwent an extensive programme of modernisation in the mid 1980’s and as so often happens refurbishment and upgrading is a continual process so as to optimise the facilities for visitors and staff alike and to ensure that Glasgow Crematorium provides the very best client experience at what can be the worst possible time for mourners.

For those interested in further reading, there is a fascinating biography of Glasgow
Crematorium in "Designs on Death: The Architecture of Scottish Crematoria" by Professor Hilary Grainger.

The Scottish Cremation Society is dedicated to promoting cremation over burial as a more hygienic and cost effective method of funeral leaving a dwindling land resource to be enjoyed by the living. 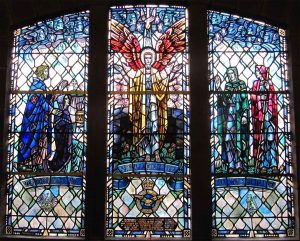 The McChlery Memorial Window was placed in memory of Second Lieutenant John Morrison McChlery of the 6th Squadron Royal Air Force and recipient of Victory and British War Medals (Note: Morrison, McChlery & Co was a respected Glasgow firm of Auctioneers and Valuers). John sadly died whilst on active service in October 1918 aged only 20 years.  He is buried in the Cerisy-Gailly Military Cemetery, Somme, France. The window, commonly referred to as the RAF window, was designed by Gordon Webster, a favoured in-house artist of the Church of Scotland and an elder in St John's Renfield Church in the West End of Glasgow. Fine examples of his work can be seen in the nave of that Church and in the nearby Hyndland Parish Church. The McChlery Memorial Window reflects Webster's typical style. It contains his hallmark of beautiful colours that blend into an almost rainbow palette. His figure drawing has static, elongated figures, often with strange blind eyes that do not appear to see and thus there is little sense of movement. The window is given life and movement in the towering central figure of Christ, with healing in his splendid wings. Features of interest in the window include:

The Badge of the Royal Air Force

Featuring the motto of the RAF “Per Ardua Ad Astra” which translates as “Through Adversity to the Stars”.

The Hosts of Heaven

Seen at the top of the window are the Hosts of Heaven, a gathering of angels created by God that describes the army of celestial beings that live in Heaven. Psalm 80 verses 14 - 15 may give a sense of the context in the window: Look down from heaven and see! Watch over this vine, the root your right hand has planted, the son you have raised up for yourself.

Seen at the top of the window, connecting heaven to earth, above the figure of Christ, there is descending, a dove. This represents the Holy Spirit and, in the context of the window, the dove of peace, which descended on Jesus after his Baptism. St Mark’s Gospel chapter 1 verses 9 - 11 tells the story ‘As Jesus was coming up out of the water, he saw heaven being torn open and the Spirit descending on him like a dove. And a voice came from heaven: “You are my son, whom I love; with you I am well pleased.”

Seen at the base of the left light is a pelican-in-her-piety. The pelican was believed to pierce its own breast with its beak and feed its young of its blood. It became a symbol of Christ sacrificing himself for humanity and, because of this, was frequently represented in Christian art. The pelican symbol in Christianity, symbolizes the sacrifice of Christ on the Cross because he gave his life-blood for others and as the Eucharist (because it represents Christ's blood and provides spiritual nourishment).

Seen at the base of the right light, a miniature lion. The Lion is usually the symbol of St Mark and it is generally agreed that the Gospel in his name is the earliest of the written Gospels. However, in the context of the overall story of the window, it is more likely that the Lion symbolises both strength and bravery.

The words “Death is swallowed up in victory”

These words connect the various themes of the window and come from St Paul’s first letter to the Corinthians Chapter 15, in which St Paul describes his understanding of the Resurrection of Christ, the resurrection of the dead and the resurrection body. The words on the window come from verse 54: When the perishable has been clothed with the imperishable, and the mortal with immortality, then the saying that is written will come true: "Death has been swallowed up in victory." Then, when our dying bodies have been transformed into bodies that will never die, this Scripture will be fulfilled:

“Death is swallowed up in victory"

Send Us A Message